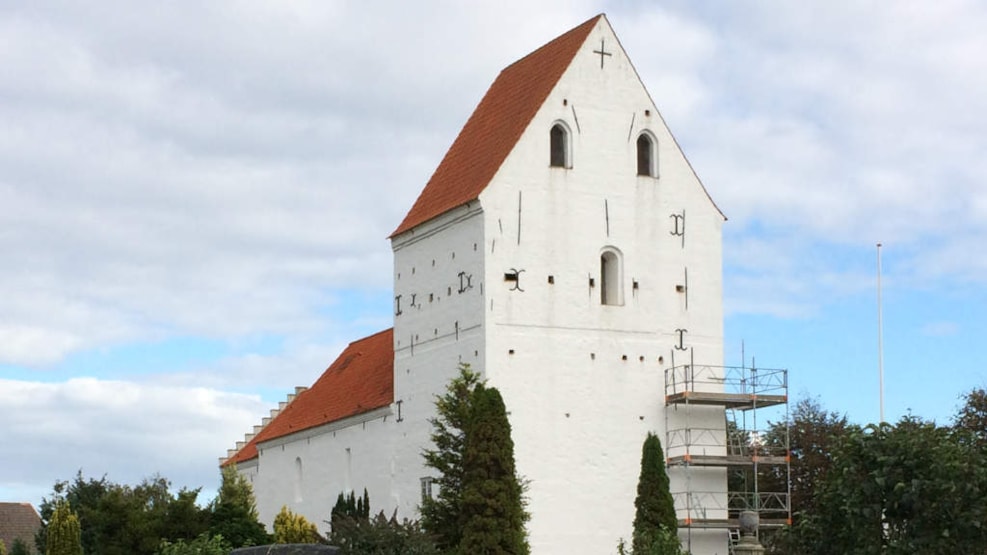 The church's chancel and nave are Romanesque, whilst the west tower and the porch on the south side are late Gothic. Externally the chancel is highly ornate, the east wall including an attractive gable recess. After the Swedish wars 1657-60 the church was in ruins. The crucifix, which now hangs on the north wall of the nave, was the only thing to be spared. The altar piece, the pulpit and the font canopy together with the priest's chair and the gallery are Baroque works from the end of the 17th century. The altar painting and the frame are from the same time, the year 1703 on the bottom right hand corner of the picture indicating the date it was painted. The font is Romanesque. The bassin and the pichter are from 1990 and designed and made by the local silversmith Børge Poulsen, who also made the candle sticks in 1988. On the south wall of the chancel is the painting "The Transfiguration on the Mount", which was the altar picture from 1855 to about 1880. It was exchanged for Constatin Hansen's painting "The Walk to Emmaus", which today hangs on the west wall of the tower chamber. When the church was restored in 1982 the present and oldest altar painting was put in its original place.

The church sits on a small hill with a beautiful view of Rands Fjord.