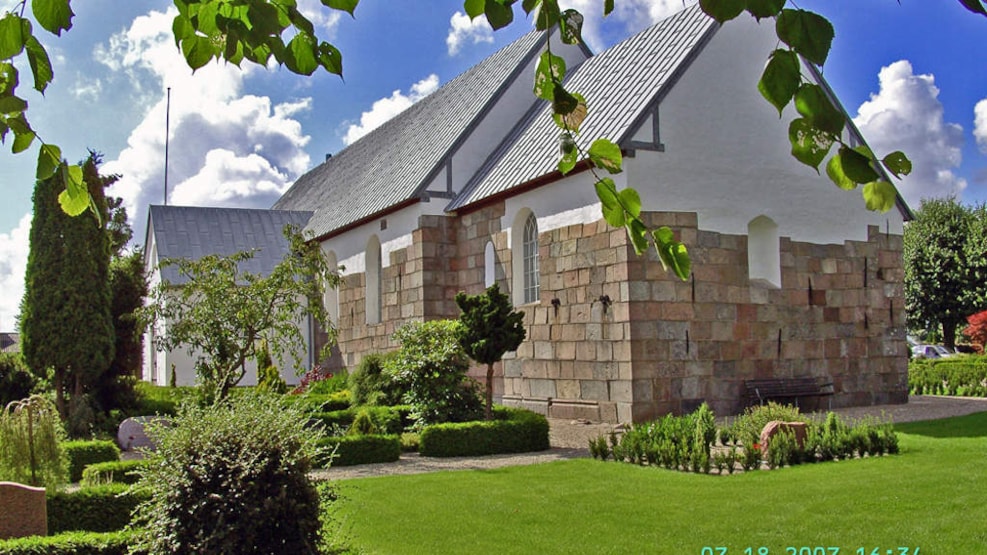 The western part of the chancel and the eastern part of the nave are the oldest parts of the church dating from the Romanesque period. The chancel and the nave were extended in the late Middle Ages, when the porch was presumably also built. When the chancel was extended, a vault was erected. The church was restored in 1881: the porch was rebuilt, the large windows were put in and a wall was put round a belfry at the west end of the church. In 1977 this belfry was removed and today the bell hangs in the bell frame on the preserved burial mound in the western part of the churchyard. The older and cracked bell placed near the entrance to the west end of the church is highly effective. On the comparatively new altar stands a very fine triptych dating from the early 16th century. On the altarpiece's lower right-hand corner is painted the years 1736 and 1919, both referring to restorations. The piece has been thoroughly restored in 2013. The piece shows the Lord and the crucified Christ accompanied by Mary with the Child and St Michael the dragon-slayer, who again are surrounded by the twelve apostles. The attractive baptismal basin in the Romanesque font is late 16th century, and the decoration in the middle represents the Annunciation.